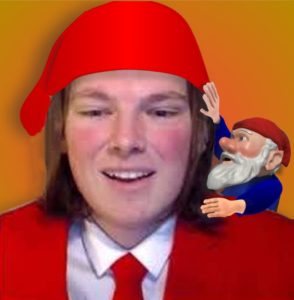 Hello again me Old Chums – well ! what a time we’ve had!

Apparently one of me Chums from deep down in Queensland Australia wanted to know more about your old Chum Noggin – so they asked that very nice young man with the red suit, Ryan Croxford, (Red Suit Interviews) if he would set up an interview with us and that allowed us to talk more closely to the fans ‘ down under.

Well, it was all set up, – Angela and I were to do the interview to talk about our adventures, but just that afternoon, I went down to me old allotment and decided to make a chicken shed. I thought it would be lovely to keep a few chickens and have some nice fresh eggs. Oh dear – chicken wire is not as easy as I thought to work with – I had me wood, and me hammer and nails, and was stretching up to fix the wire to the post, when all of a sudden, I lost me footing, let go of one end of the wire, and the mesh sprang back and wrapped itself all round me – OOPS and corks in a bottle – what had I done! The more I tried to get loose, the more it hooked into me jacket and trousers, I was like a see – through curly sausage and unable to move!

So, there I lay – feet in the air, wrapped up in chicken wire – I shouted for help, but there was nobody around to hear – and not only was it getting dark, but I would miss the interview with Australia, and more importantly me supper,

I was very hungry, wanted to go to the lavvy (toilet) and worried about missing the appointment – but eventually I thought, there is nothing this old Gnome can do – and there, with the chicken wire wrapped around me like a cold prickly hard sleeping bag – I drifted off to sleep.

Next morning, as daylight came over the hill, I was woken by a big soft tongue licking the top of me head – (Me hat was somewhere on the fence post where it had been caught by the wire). It was a large furry dog, who thankfully knew enough about bad situations to run away to its owner – who came and cut me free from the wire, dusted me down, and gave me a nice cup of tea from his flask. So all was well in the end – Perhaps the chickens can keep their eggs to themselves for now, and I understand Ryan has forgiven me for missing the interview. So really this blog is also a tribute to him for being very understanding.

Angela did the interview, and I understand all went well, talking about all things Noggin and answering questions from Chums.

Meanwhile, planting potatoes seems like a much better and much safer activity!

This site uses Akismet to reduce spam. Learn how your comment data is processed.